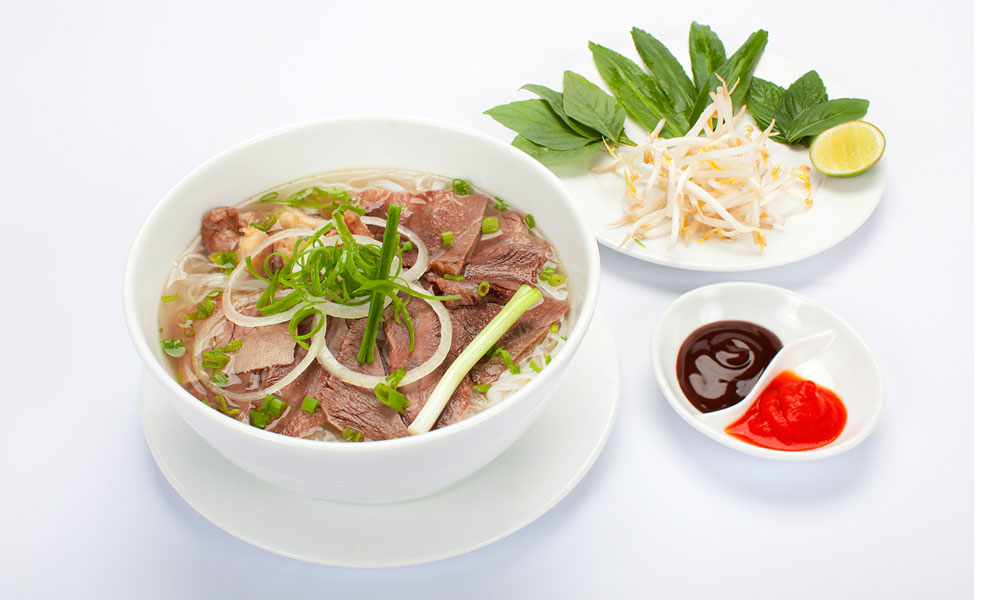 “Pho” is one of the represented dishes for traditional cuisine in Vietnam, the main component of “Pho” are “banh pho” and “nuoc leo” or soup with thin slcies of beef or chicken. In addition, “Pho” eats together with some spices as chili sauce, lemon, fish sauce, shelf, basil and coriander to increase the feature flavor of “Pho”. Normally, “Pho” is used for breakfast, but in some large provinces this dish is enjoyed all day. For having a delicious bowl of “Pho” depends on the experience of processors to cook a fragrant pot of soup. Besides that, Vietnamese always have creativity and stylized traditional “Pho” to become new dishes such as: sautéed noodle, roll noodles and fried noodle so the diners will have a lot of choices and have chances to try new things about “Pho”. 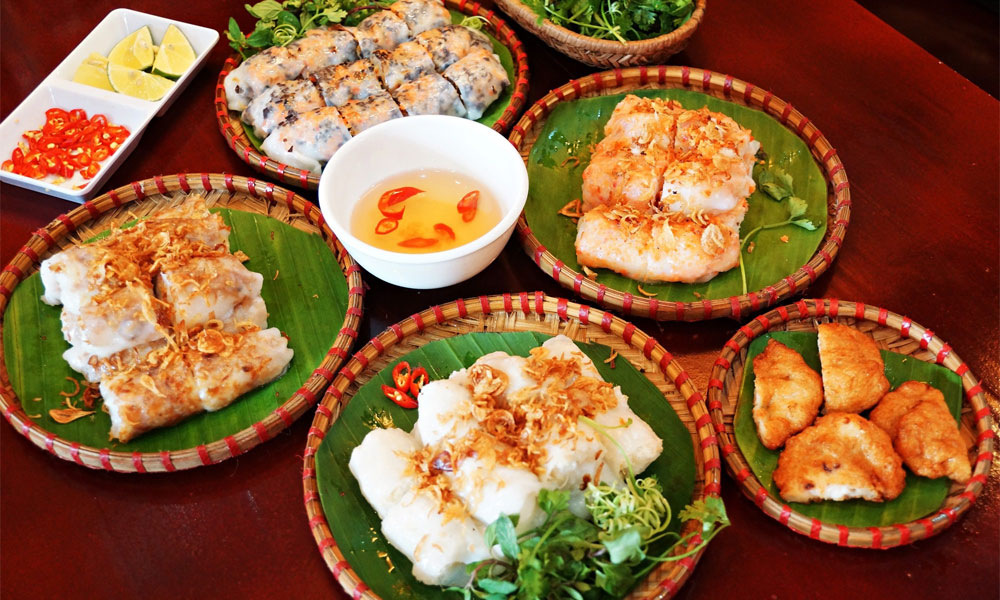 “Banh Cuon” is one of the rustic dishes like a simple cuisine but bring refined flavor with sweetness fish sauce, filling aroma of mushrooms. By the period had many types of “Banh Cuon” that was born with the aiming to meet the diner’s diverse tastes such as “Banh Cuon” eats with egg, pork bologna or “vegetarian Banh Cuon”. A dish is not colorful and nor precious in the process method but have an attraction for diners and remain the attachment in the diner’s heart as well as tourists when visit Saigon and enjoy Vietnam cuisine. 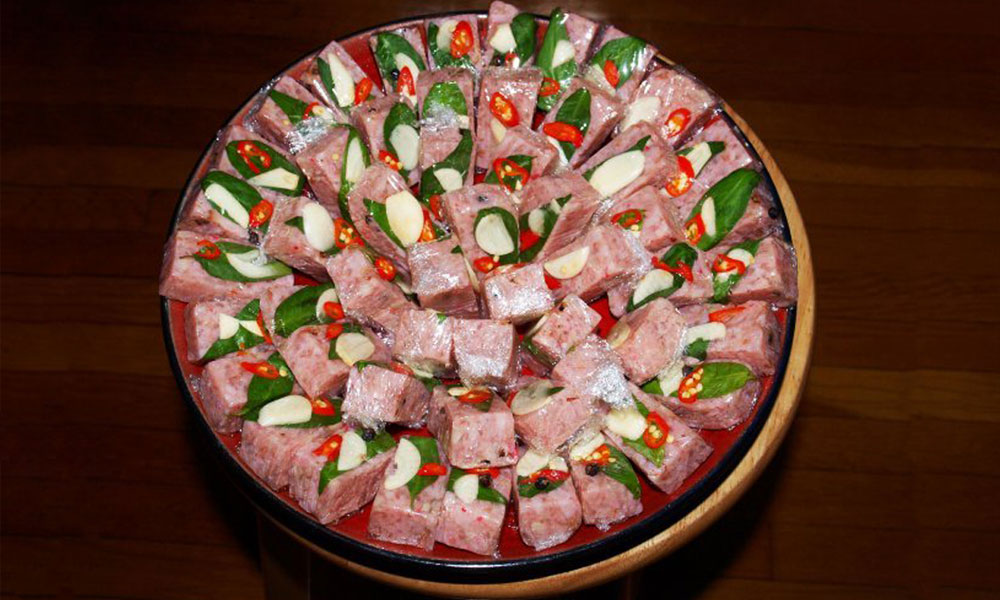 “Nem Chua” is made by pork meat with some spices as chilly, pepper, salt, sugar, garlic and is covered by banana leaves in a period of time around 3 to 5 days after that we can eat with guava leaves or fig leaves. Normally, Vietnamese people eat “Nem Chua” with bread, “Banh Cuon” or rice.
● 435 Phan Van Tri Street, ward 5, Go Vap district, HCM City. (Nem Chua Bình Định) 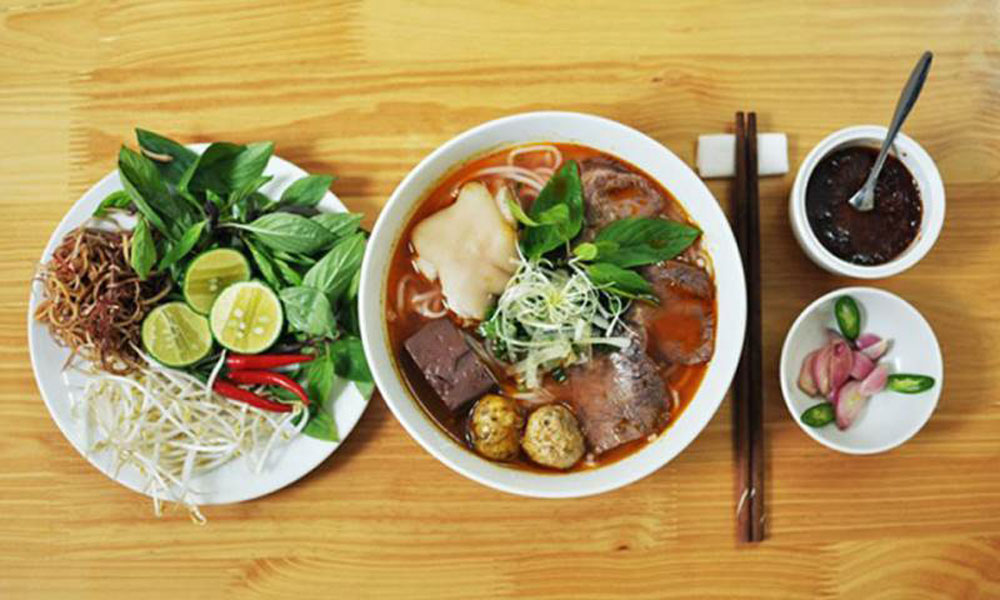 “Bun Bo Hue” is specialties of “Hue” in central region. Although anywhere in Saigon also sells “Bun Bo Hue” the flavor has a little bit different with the featured tastes of people in “Hue”. If tourists have chance for visiting “Hue” or called “Dreamy land” with bold taste dishes and one time to enjoy “Bun Bo Hue”. The component is not quite complex but is very diversity because the combination of tender beef, “Hue” roll, pork leg and aitchbone to cook a pot of soup to eat together with the banana flower and spinach are fibroblasts along with noodles and some indispensable spices such as lemon, chilly and chilly satay to increase the flavor more delicious.
Some locations to eat “Bun Bo Hue” in Saigon
● 7 Cao Thang Street, ward 2, district 1, HCM City. (MON HUE Restaurant)
● 110 A Nguyen Du Street, Ben Thanh ward, district 1, HCM City. (Bun Bo Dong Ba)
● 189 Bui Vien Street, Pham Ngu Lao ward, district 1, HCM City. (Bun Bo Nam Giao) 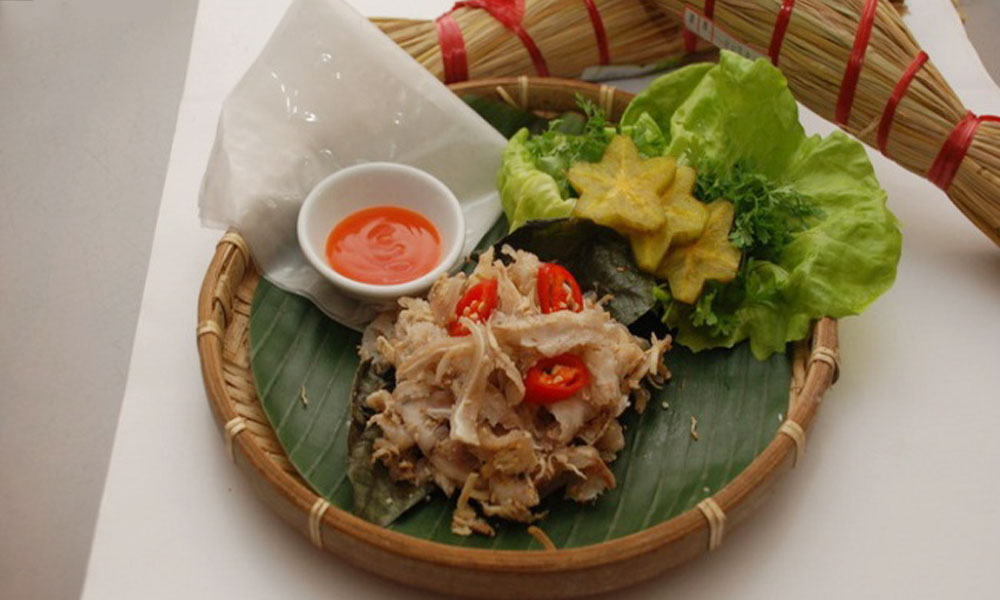 “Tre” comes from Binh Dinh province and use to appetizer. It is similar as “Nem Chua” with a lot of components namely: pig ear, chilly, garlic, fish sauce, sugar, pepper, galangal root and sesame all of them are cover by banana leaves and straw after 2 to 3 days can eat and drink with beer diners will feel the flavor of central region.
Somewhere to buy “Tre” in Saigon:
● 59 Thep Moi Street, ward 12, Tan Binh district, HCM City. (TRÉ BÀ ĐỆ) 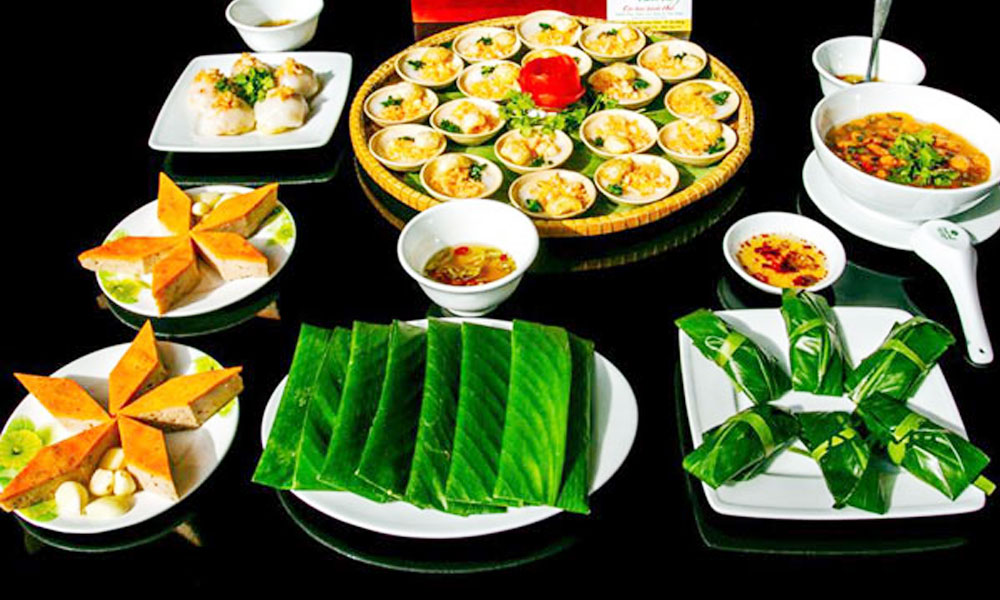 They are specialties of “Hue” and the pride when introduce them to tourists. “Banh Nam – Banh Beo – Banh Bot Loc” is made from rice flour and the fineness of processors with the blending more abundant and interesting of the soft cakes and sweetness fish sauce that bring a delicacy as well as “Hue” flavor to travellers.
Some places to try “Banh Nam – Banh Beo – Banh Bot Loc” in Saigon:
●1B Vo Truong Toan Street, Binh Thanh district, HCM City.
● 4/32 Bach Dang Street, ward 24, Binh Thanh district, HCM City. 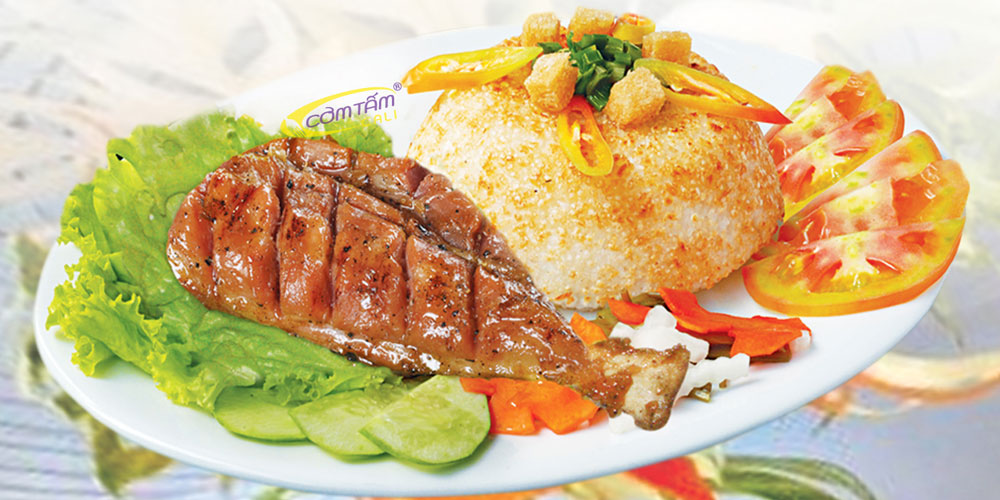 The citizen of Saigon can eat “Com Tam Suon” all day, when you go out of the door you will see some breakfast shops where sell “Com Tam” at the alley are quite crowed and bustle. Selling “Com Tam Suon” places usually attracts diners by aromatic grilled ribs and aromatic fly across the alley, a dish of “Com Tam Suon” includes rib, pork, fried egg, and pickled carrot combine with cucumber as well as tomato and eat together with feature fish sauce to contribute for create Vietnam traditional flavor. “Com Tam Suon” attaches with the Vietnamese people’s life from affordable classes to V.I.P classes, any person can enjoy “Com Tam Suon” 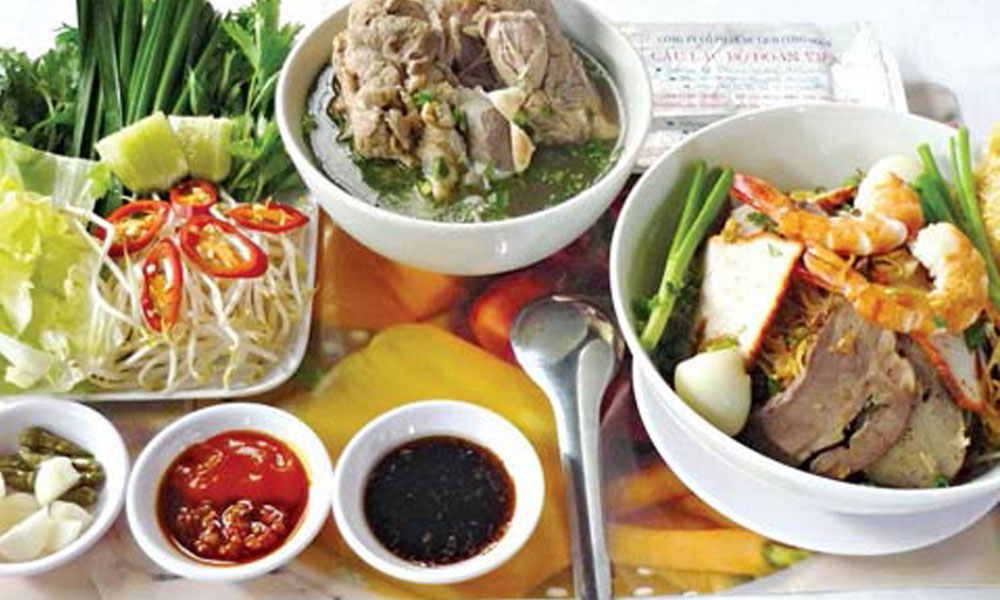 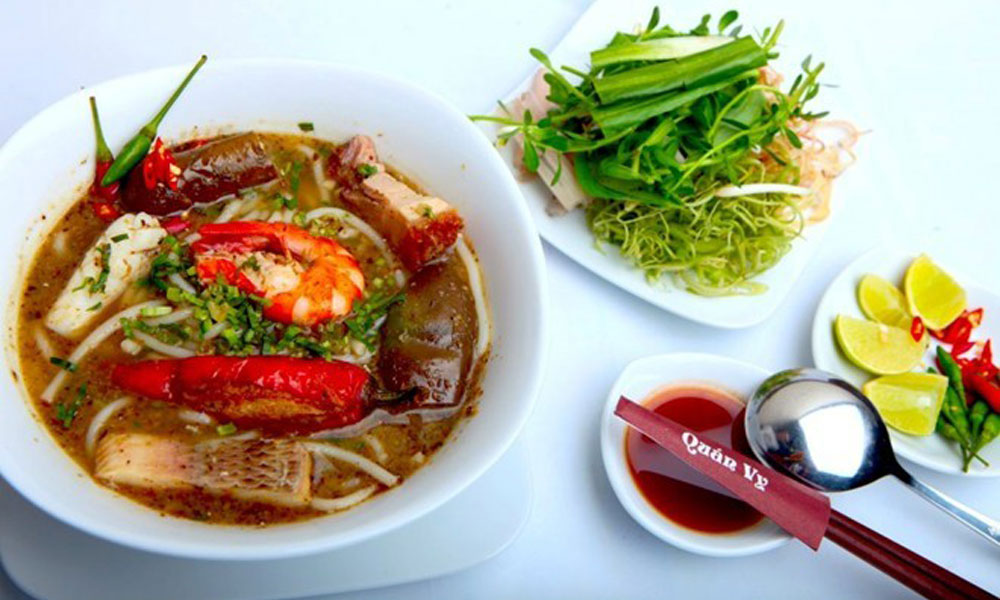 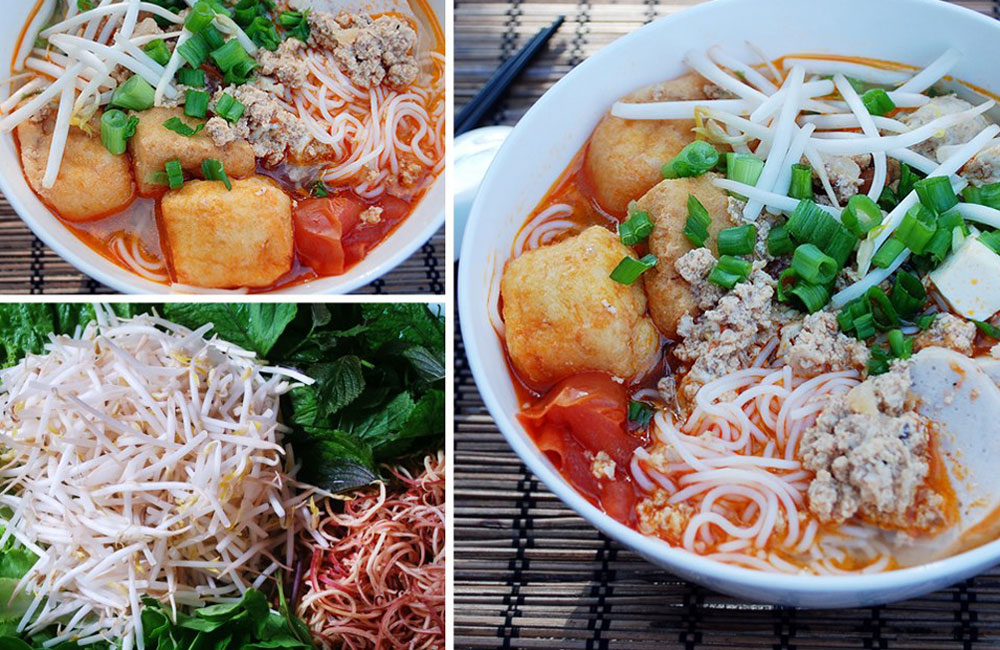 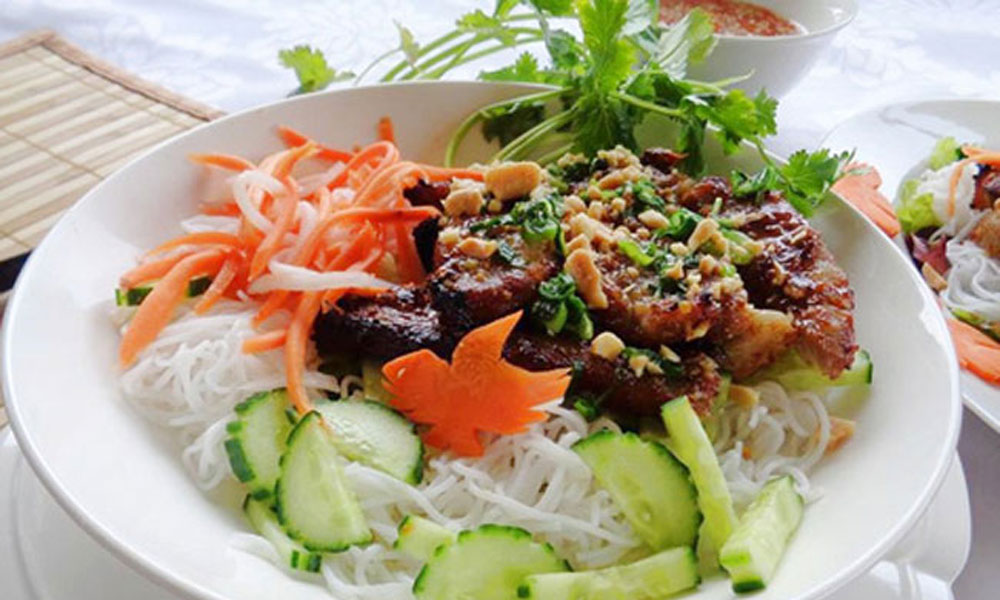 “Bun Thit Nuong” is common dish and is favorite dish of three regions including: North – Central – South, “Bun Thit Nuong” of each region always has specific flavor, this dish can use to make breakfast, lunch or dinner to be quite suitable, delicious and attractive. With grilled pork meat are covered by an auburn sheen and add several sesame seeds to increase the attraction as well as flavor of dish. In addition, “Bun Thit Nuong” has stronger taste with fragrance of lemongrass concurrently blending between green vegetables and sweet & sour sauce that makes “Bun Thit Nuong” is more and more abundant and featured even so helped increasing the beauty of cuisine in Vietnam.
Some places to taste “Bun Thit Nuong”:
● 487 Nguyen Tri Phuong Street, district 10, HCM City. (VỊ SAIGON – Bun Thit Nuong). 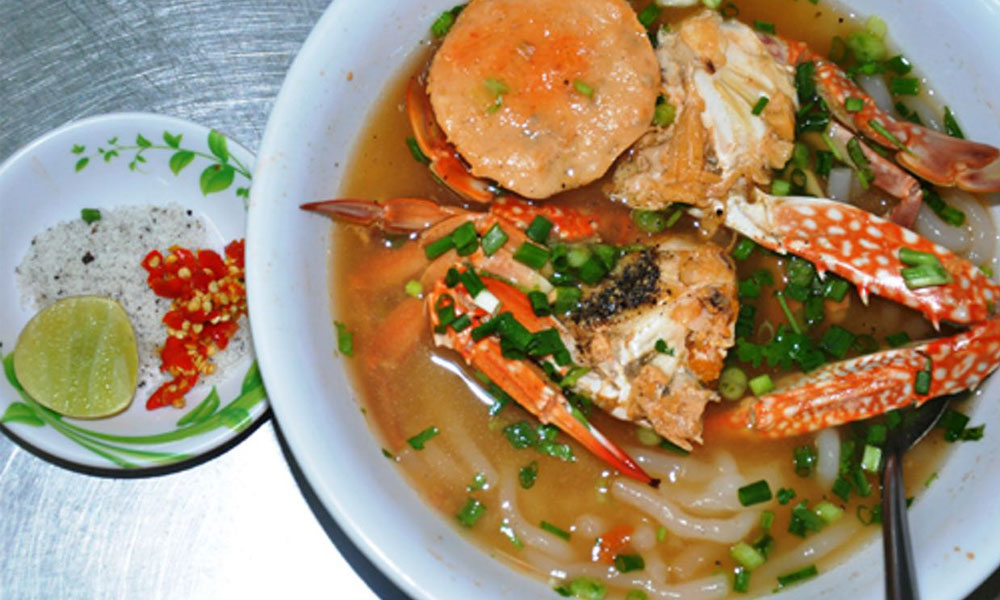 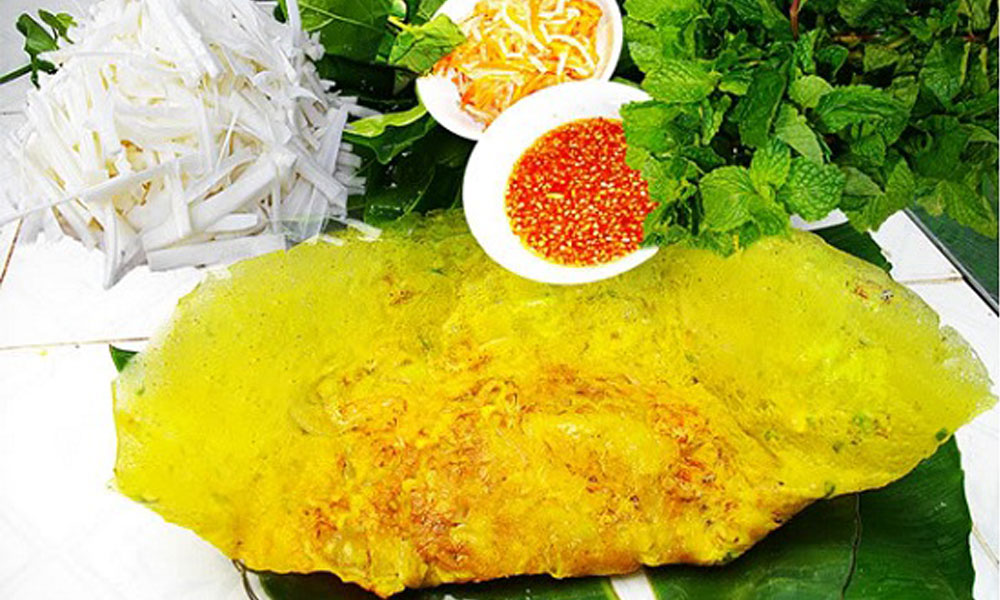 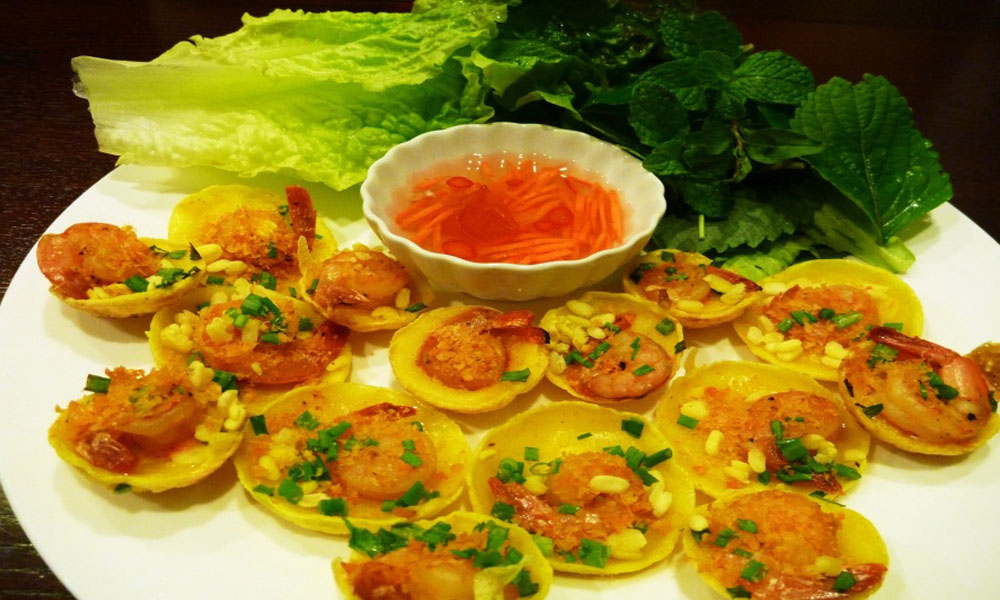 “Banh Khot” aslo is called “egg bread”, to be familiar dish of people in the Southern. “Banh Khot” has the circle as “dirt cake” but is cooked by grilled way into mole within oil, “Banh Khot” is not difficult to make but it require finesses of processors. Not thing is wonderful when enjoy “Banh Khot” in the evening and chatting together in a warm space. Similar as “Banh Xeo”, “Banh Khot also eats together with sweetened fish sauce and green fresh vegetables. However, some of people will mistake between “Banh Khot” and “Banh Can” because they are similar as the shape, color and filling but we can distinguish by the sauce it has difference flavor and sauce’s “Banh Can” is more salter than “Banh Khot”. Although in any region “Banh Khot” is also a simple dish and is love by everyone as well as expresses special culture of Vietnam.
Somewhere to taste “Banh Khot’ in Saigon:
● 120 Cao Thang Street, ward 4, district 10, HCM City. “Banh Khot CÔ BA VŨNG TÀU”
●270 Phan Xich Long Street, ward 2, Phu Nhuan district, HCM City. “NGON Restaurant”
● 31 Hoang Hoa Tham Street, ward 13, Tan Binh district, HCM City. “Banh Khot KIM NGÂN” 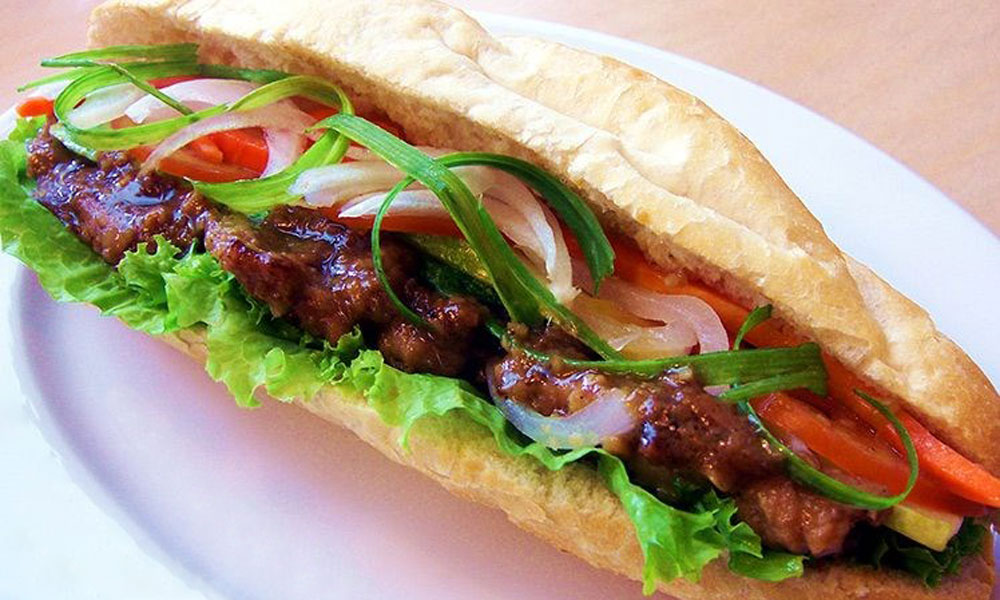 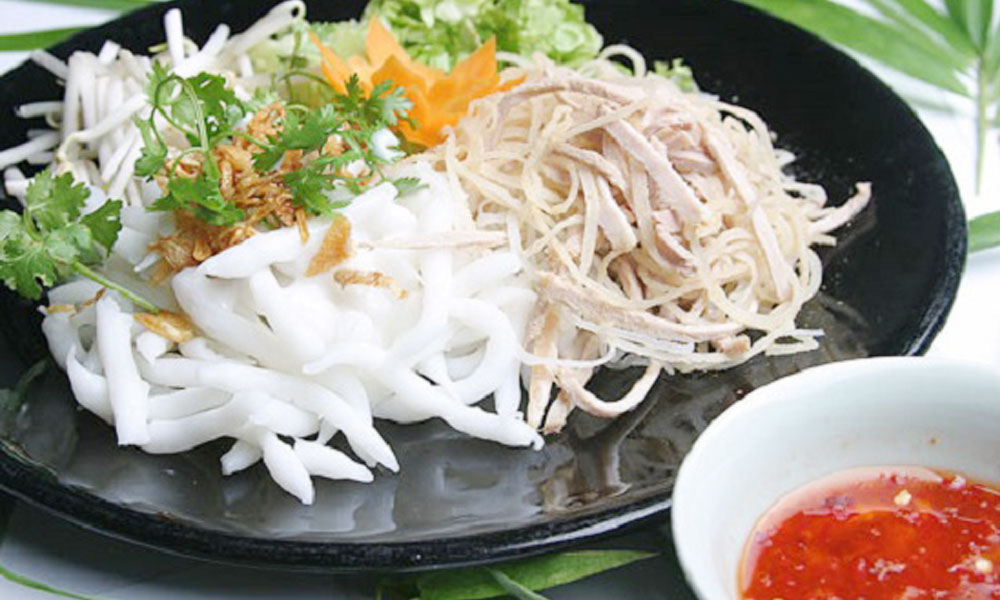 “Banh Tam Bi” is made from rice of Vietnamese. If the tourists hear the name of this dish at the first time, you will think that it is a sweet cake to dessert but it is both snacks and the main dish that can replace for breakfast, lunch or dinner. In addition, you will be shocking when enjoy it because the flavor is not only sweet but also salt by the blend of the sweetness of coconut, the salty of fish sauce and the greasy of green onion oil to make a plate of “Banh Tam bi’. Besides that, the diners will be also attractive by a colorful dish including green of green oinion and fresh vegetables, white of “Banh Tam Bi” and coconut, yellow of skin pork mixed with fried rice that is pureed and orange of picked carrot, all of them has painted partly of Vietnamese’s cuisine picture more abundant. 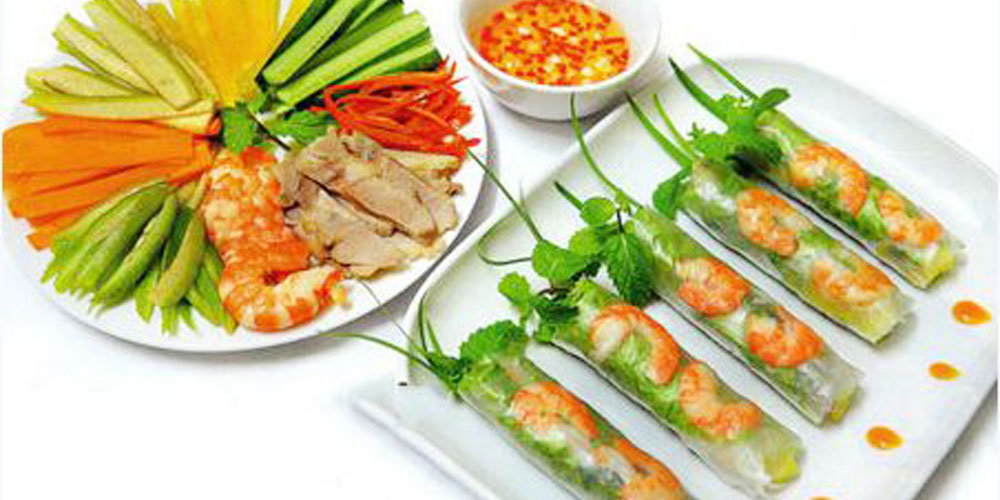 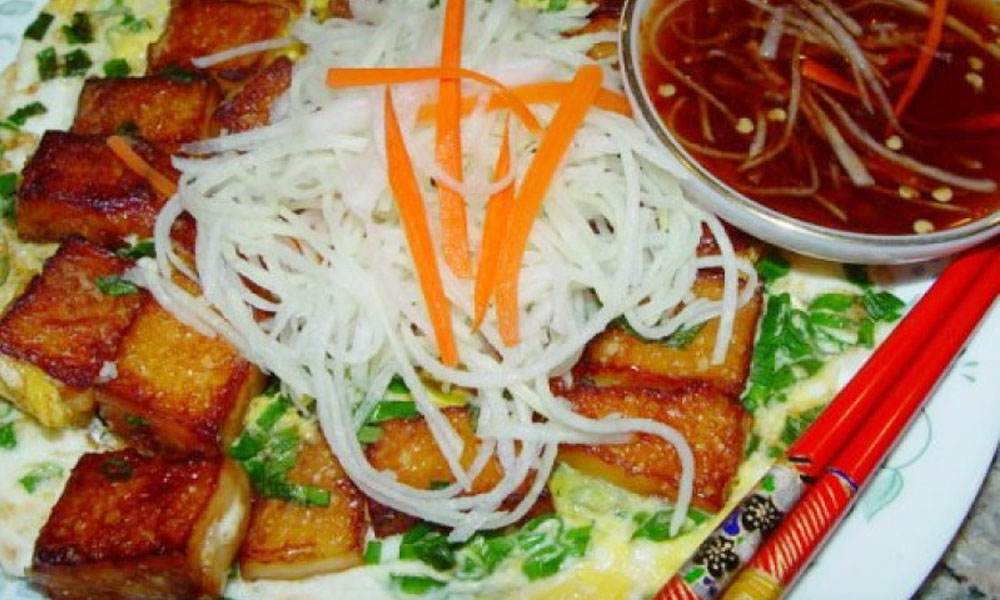 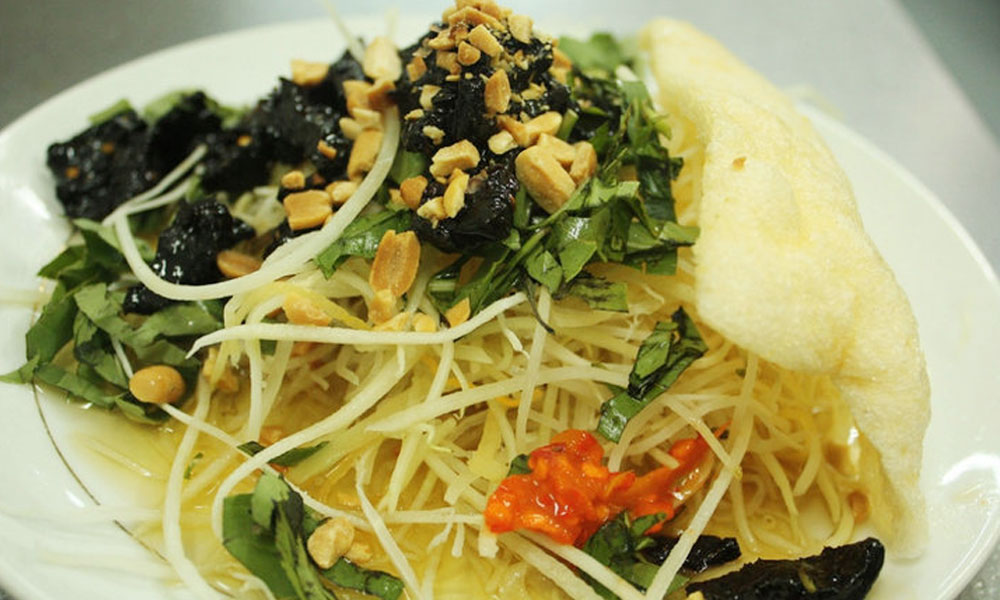 “Goi Kho Bo” is interesting snacks in Saigon land and is love from teenager to adult. “Goi kho bo” is voted the most typical snacks in Saigon because rare dish gather many savors such as: sour, chilly, salt and sweet as “Goi KhoBo” along with the aroma of peanut, laksa leaves and the crispy of fiber papaya are mixed with dried beef sauce to create “Goi Kho Bo” just has in Vietnam and special in Saigon. The tourists will have new experiences about this snack as well as is more wonderful when eat a plate of “Goi Kho Bo” and drink a glass of sugarcane juice in the evening with friends and chatting about the life, it is seem as Vietnamese culture after hard working or studying, you will feel more comfortable and relaxing.
Some places to enjoy “Goi Kho Bo” in Saigon:
● Le Van Tam Part, Da Kao ward, district 1, HCM City.
●107 Nguyen Van Thu Street, Da Kao ward, district 1, HCM City.

SWEET SOUP “CHÈ”
In cuisine Vietnam and some balcony countries sweet soup is seen as snacks and is use to dessert at the end of main meal. In which sugar is the mainly ingredient and cannot lack of in sweet soup dish, besides that, components cooks Vietnamese sweet soup as green bean, black bean, red bean, white bean lotus seeds, crease, cereals, fruits, vegetables and some region as “Hue” use fried pork to process sweet soup. In addition, sweet soup plays an important role in Vietnamese of cultural cuisine to build a completed culinary picture. 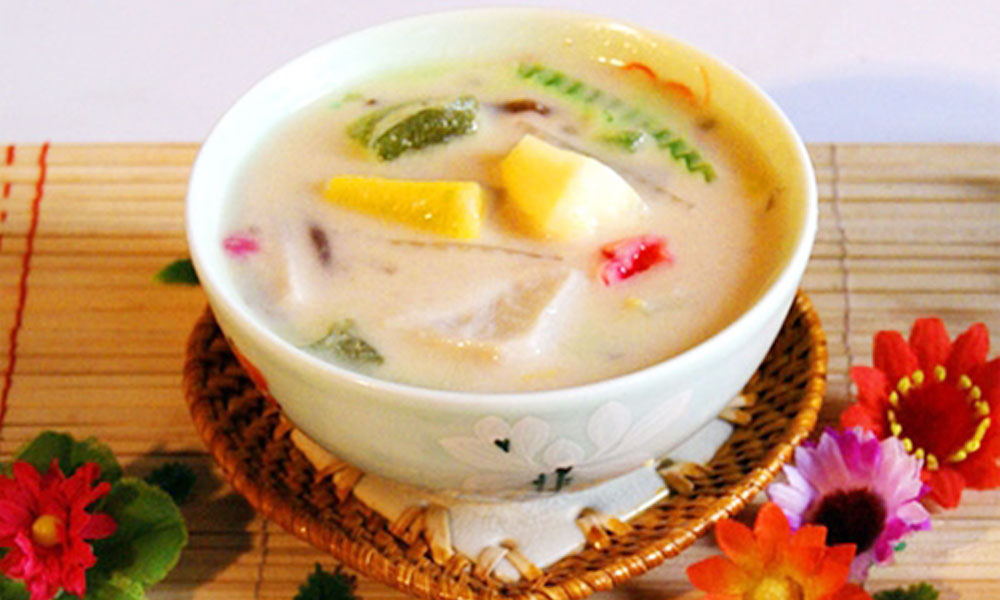 “Che Ba Ba” has to eat when it is hot, fatty of coconut that blends with the aroma of green bean, sweet potato, manioc and lotus seeds. “Che Ba Ba” is also called “mixed sweet soup” because it has so many components from 8 to 10 things to cook a hot of sweet soup and is has become specific dish of southern.

“Che Buoi” comes from Can Tho province and is popular dessert in southern. This dish requires fineness and patience of processor, it cooks from grapefruit peel, green bean without peel, flour, sugar and coconut and after that “Che Buoi” adds some ice to create cool feel to dispel the summer heat in Saigon. 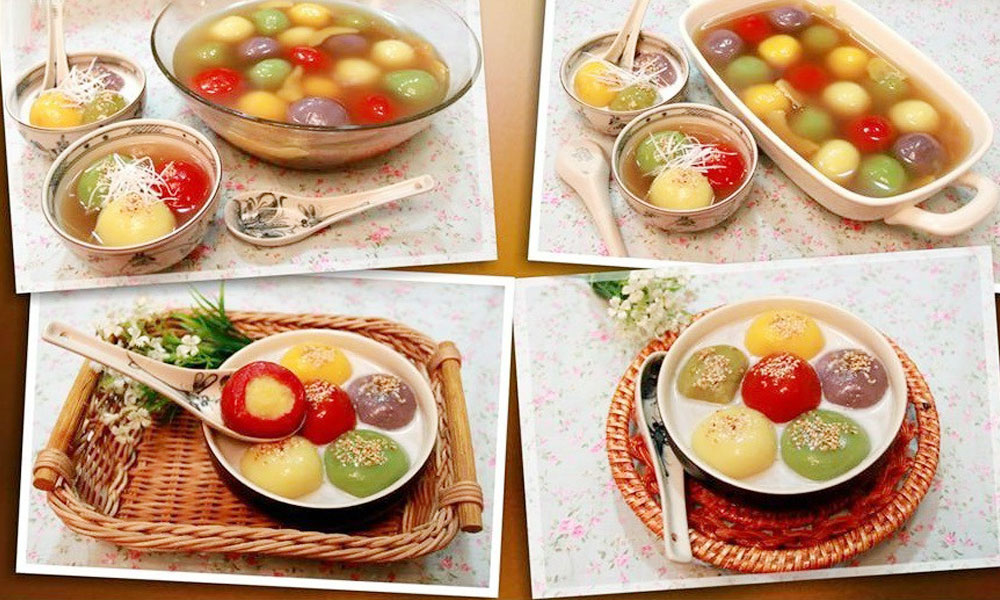 “Che Xoi Nuoc” has many variations by many colors that are made by the natural color from vegetables as beetroot, spinach and so on. It usually appears in tet holiday of Korean, full moon in July and other festival in the year. “Che Xoi Nuoc” is cooked by “southern” style the tourists will feel fatty of green bean as well as coconut and the aroma of fried onion.

“Che Thai” processes by available materials with many kinds of fruits such as: jackfruit, lychee, jelly, milk and main material to make special flavor of “Che Thai” that is durian.

“Che Khoai Mon” is febrifuge dish but bring a familiar warm feeling for diners. Sometime it also creates a strange feeling by sweetness and fatty of taro and coconut to make abundant dessert dish.